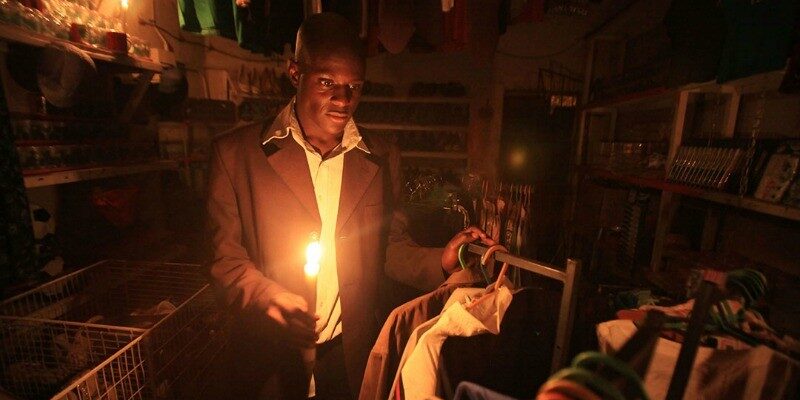 Clever Dongo looking for clothes to buy using candles after the electricity was cut. Zimbabwe has been expiriencing serious power cuts over the years that people have resorted to using candles and firewood to cook in Harare, Zimbabwe. The political instability in the Southern African country has resulted in a serious economic down turn.

Zimbabwe will start receiving 100MW from Zambia’s state-owned power utility, Zesco, early next month under a five-year deal, while a delegation from Mozambique is expected in the country today to finalise negotiations to supply additional 150MW to ease ongoing power cuts.

The delegation from Electricidade de Moçambique (EDM), which is providing 50MW to Zesa Holdings, will be here for a week-long visit.

The local power shortfall was worsened by depressed generation at Hwange and Harare thermal power stations, including the loss of a unit that produces 125MW at Kariba Power Station.

Zesa has since facilitated the creation of a group of intensive energy users to finance power imports from the region.

“We signed power import deals with Zambia a long time ago, but we had not been getting electricity from the country because of cash flow challenges,” said Eng Choga.

“Now, because we have prepaid, we expect this to be settled in the coming weeks and we will start receiving 100MW from Zambia.

“We have to prepay them a month before we receive the electricity.”

The power import deal with Zesco has a three- to five-year tenure.

“Currently, we are getting 50MW from Cahora Bassa and 50MW from EDM in Mozambique.

“We had signed a deal for 200MW with EDM, but we were only accessing 50MW.

“So they are sending a delegation into the country tomorrow (today) and they will be in the country for the whole week so we will discuss how we can access the remaining 150MW.”

“In relation to the 150MW, a high-powered delegation is coming to discuss the creation of an Intensive Energy User Group comprising companies that will be accessing power directly from Mozambique.

“This will significantly reduce the burden on Zesa.

“Private sector has been clamouring for this to ensure constant supply.”

Zimbabwe, he said, needs at least US$15 million per month to import power.

“Zimbabwe often gets about 400 MW daily from Eskom, but they are facing crippling challenges and have been unable to supply us.”

Last week, the biggest power generation plant in Zimbabwe, Kariba South, was generating only 758MW against an installed capacity of 1 050MW.

Hwange Power Station was generating 411MW against an installed capacity of 920MW.

“That Zesa has unlocked some 300MW in imports is a welcome development and as industry we expect that to start feeding into industry, and (we) also hope that it’s a firm arrangement,” he said.

“Whilst the 300MW is welcome, we need to hear from the power utility when 2 100MW will be sustainably supplied and also to grow in line with demand growth.”

“We lost one unit at Kariba Power Station which produces 125MW, that is unit 6, and the fault that was detected requires that the thrust bearing be taken to South Africa, and the bearing will be brought back on August 12.

“We also had challenges from Hwange but we have since recovered two units.”

Hwange Power Station, he said, was running on two units last week, but it is now back to four units and as of Monday generation stood at 407MW.

“We also had problems with Harare station three. It was also out of service but it has been brought back to service this afternoon (Tuesday).”

Completion of Unit 7 in November this year and Unit 8 at Hwange Power Station by March next year will add 600MW to the grid and help ensure reliable and sustainable supplies to meet growing demand.