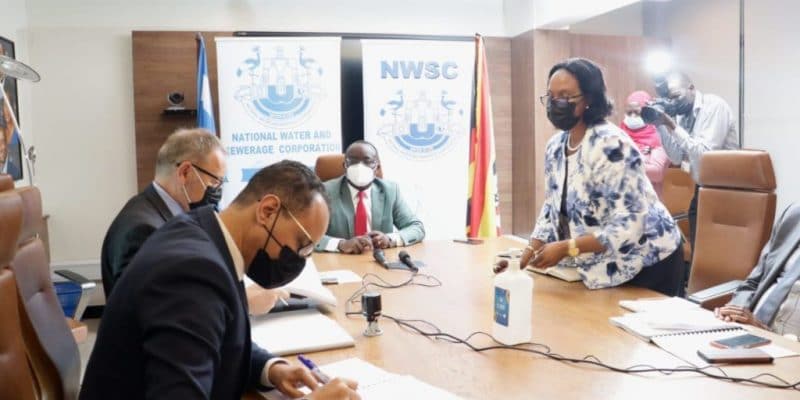 Sogea-Satom, the subsidiary of the French group Vinci, has signed a contract with the Ugandan authorities to provide the city of Gulu with new drinking water and sanitation facilities. The project will benefit 484,000 people.

The harvest is good for French companies in Uganda. After TotalEnergies in fossil fuels, it’s Sogea-Satom’s turn to sign a contract with the Ugandan authorities for the construction of new drinking water and sanitation facilities in the city of Gulu. The subsidiary of the French group Vinci has thus been chosen for the implementation of the second phase of the Gulu Water Supply and Sanitation Project.

Under the contract signed with the state-owned National Water and Sewerage Corporation (NWSC), Sogea-Satom will install electromechanical and raw water pumping equipment with a capacity of 30,000 m3 per day at the intake on the Nile Victoria River in the Karuma locality. The company headed by Jean-Michel Guelaud will also build a drinking water plant in Karuma, more than 75 km from Gulu. With a capacity of 30,000 m3 per day, the future plant will have a reservoir for storing drinking water.

The Sogea-Satom contract also covers the construction of a 10,000 m3 per day drinking water pumping station at the Karuma plant. In Gulu, the company, which employs more than 15,000 people mainly in Africa, will build a new reinforced concrete water reservoir in the Customs Corner area with a capacity of 5,300 m3 and five steel elevated storage tanks of 100 to 500 m3.

On the sanitation side, the Vinci Group subsidiary will provide this city of over 216,000 inhabitants with a sludge drying facility at an existing wastewater treatment plant in Gulu. The drying plant will occupy an area of 450 m2. Sogea-Satom will also be in charge of all the electrical, automation and remote management works for all the equipment.

The installations will serve the populations of Gulu, as well as those of Kamdini, Koro Abili, Karuma, Bobi, Palenga and Minakuru. NWSC estimates that the project will benefit 484,000 people. Implementation will be financed by the Kreditanstalt für Wiederaufbau (KfW), as part of the second phase of the Integrated Programme for Improving Livelihoods in Gulu and Small Towns en Route in the Nile Victoria Watershed (IPILC 2).

The German Development Bank also participated in the financing of the first phase of the Gulu Water Supply and Sanitation Project, which was completed in October 2020 with the inauguration of new infrastructure. This initiative of the Ugandan government is raising the level of access to safe water and sanitation throughout Uganda. According to Water.org, 7 million Ugandans still lack access to safe drinking water, more than three times the population of a country like Gabon (2.2 million people). In 2019, only 18% of the Ugandan population (45.74 million people) had access to sanitation, according to the Global Water organization.