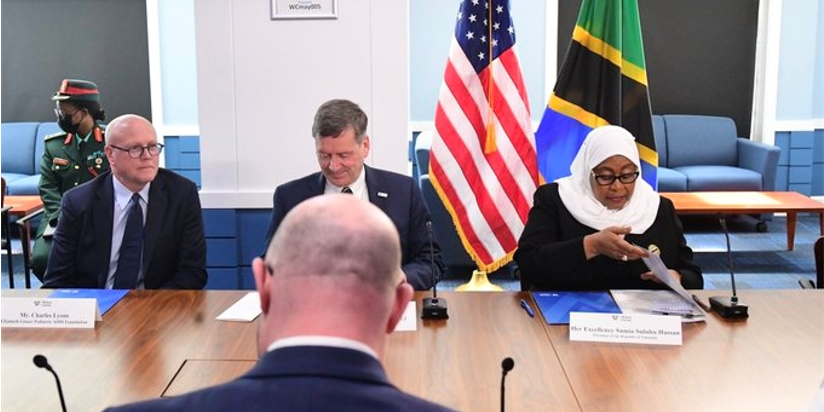 Tanzania and the US have on Friday April 22, signed Seven agreements for business projects which are set to be implemented in Tanzania by investors and companies from the United States of America.

The signing of the agreement was witnessed by President Samia Suluhu Hassan who is in the United States for a two-week official trip.

According to a statement issued by the directorate of presidential communications, the deals with key private sector companies are worth a total of $5.04 billion (Sh11.3trillion) and are expected to create an estimated 301, 110 jobs in agriculture, tourism, trade and other sectors of the economy.

President Samia Suluhu Hassan with US Chamber of Commerce CEO Suzanne Clark at the Chamber’s offices in Washington DC.

“President Samia witnessed the signing or Memorandums of Understanding (MoUs), letters of intent and announcements to initiate negotiations on investment, trade and business relations between US companies and Tanzania in Washington D.C.” reads part of the statement.

The statement further adds: Other projects will target maximization of value chain activities within the northern Circuit or Tanzania’s tourism industry by modernizing the promotion, services and diversification or tourism products.

“President Samia also witnessed important announcements for US based Companies that have interests and plans to engage in Tanzania economic business and trade relations. They include Upepo Energy and Astra Energy Crane Currency and parallel Wireless,” added the presidency in the statement.

Among other engagements, President Samia also attended the Executive Business Roundtable at the U.S. Chamber of Commerce headquarters in Washington DC which brought together members of the business community, government and representatives of the private sector from both countries to discuss mutual investment, trade and business opportunities.

The President’s visit has also seen her launch the Royal Tour documentary in New York on April 18, and Los Angeles California on April 21.

She also met and discussed a wide range of issues with US Vice President Kamala Harris at White House, Washington DC on Friday May 15.