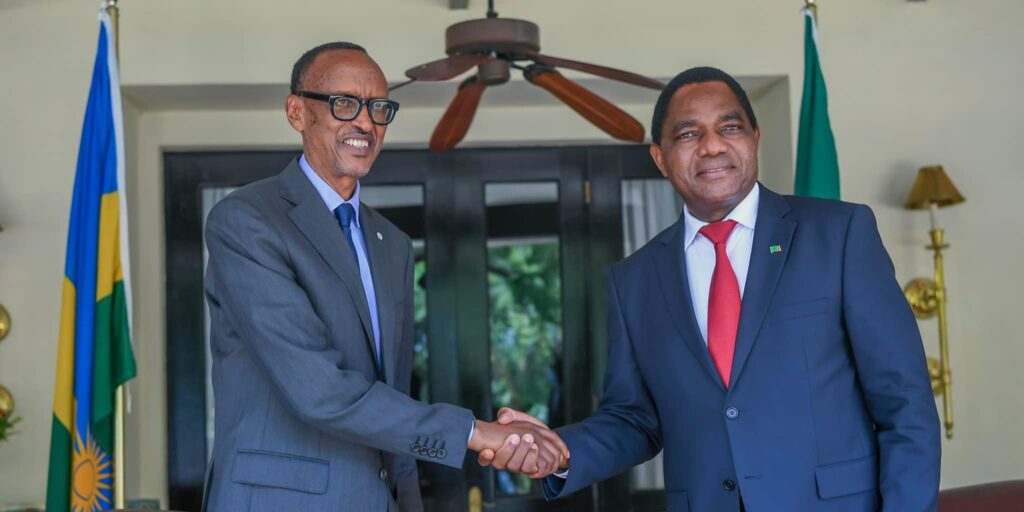 “Dr. Livingstone I presume,” Henry Morton Stanley said on the shores of Lake Tanganyika when he met David Livingstone at Ujiji village in 1873. Stanley traced Livingstone because of the letters he wrote back to Scotland. In this write up we appreciate the concept of visibility of Livingstone, a city that houses one of the world’s natural wonders the mighty Victoria falls, a city that was a venue to the most recent epic meeting that two great sons of Africa, Hakainde Hichilema and Paul Kagame used to strengthen their diplomatic ties.

One of the most prolific events of the week that caught attraction of the regional markets was the meeting of two of the continents greatest leaders in Livingstone. The leaders of the Copperbelt and Switzerland of Africa on April 05 converged in Livingstone to strengthen diplomatic and economic ties. The Head of state in Africa’s second largest red metal hotspot Hakainde Hichilema hosted his Rwandese counterpart Paul Kagame who was on a two day state visit to strengthen diplomatic and economic ties. The two leaders held talks and inked (7) key memoranda of understanding cutting across tax administration to skills transfer to sector trade opportunities.

This visit by Kagame was the first on Hichilema’s clock following his August 2021 poll victory which has seen him and his foreign affairs minister Stanley Kakubo utilize economic policy diplomacy to both mend foreign policy relations and mine trade opportunities deeper than ever before. Infact there has never been a time in the history of Zambia when economic policy diplomacy was maximized as such to solution for growth stimulus over short space as seen over the last 8 months. With Zambia in the labyrinth of a debt restructure amidst economic woes on the back of fiscal fragilities exacerbated by a pandemic that shriveled growth to negative territories. It was our privilege to host our brother His Excellency President Paul Kagame as our first State Visit.

“Signing the seven Memorandums Of Understanding (MOUs) with Rwanda demonstrates our determination to revive the economy through economic cooperation and strategic partnerships. The MOUs will increase investment, boost living standards, create jobs and secure livelihoods. These areas are surely a way to address the challenges the citizens of both Rwanda and Zambia face,” Zambia’s Republican President carried on his social media handle.

Zambia, default rated by international rating agencies on its foreign currency long term issuer ratings, has undergone a political risk shift that has seen a surge in confidence that has allowed for risk appetite to claw back in a suppressed market. The Southern African new dawn government presented a 2022 private sector skewed budget in the quest to effect growth faster characterized by tax cuts and a plethora of incentives and has continued to mine opportunities with United Kingdom, the European Union and United States. For East Africa, Zambia continues to eye the Great Lakes region for exports such as Sugar which Rwanda is likely to benefit from while in reverse Rwandese technology advancements both in the digital and automotive faculties can benefit Zambia in not only lessons learnt but skills exchange.

Rwanda recently commissioned a Volkswagen factory which could remind Zambia of the Fiat plant its once ran in Livingstone town.

The gesture by the two leaders was symbolic of climate resilience importance in a world that has embarked on a strong decarbonization drive. The two nations have in one way or another embraced the climate change agenda through technology and deliberate steps to preserve ecological capital through planting of trees.

Other homogenous offerings that Zambia and Rwanda have is tourism which both Presidents are aggressively marketing to the world. Rwanda offers are aquaculture and medicines which Zambia could leverage off while it taps into the East African market to export corn its staple product.