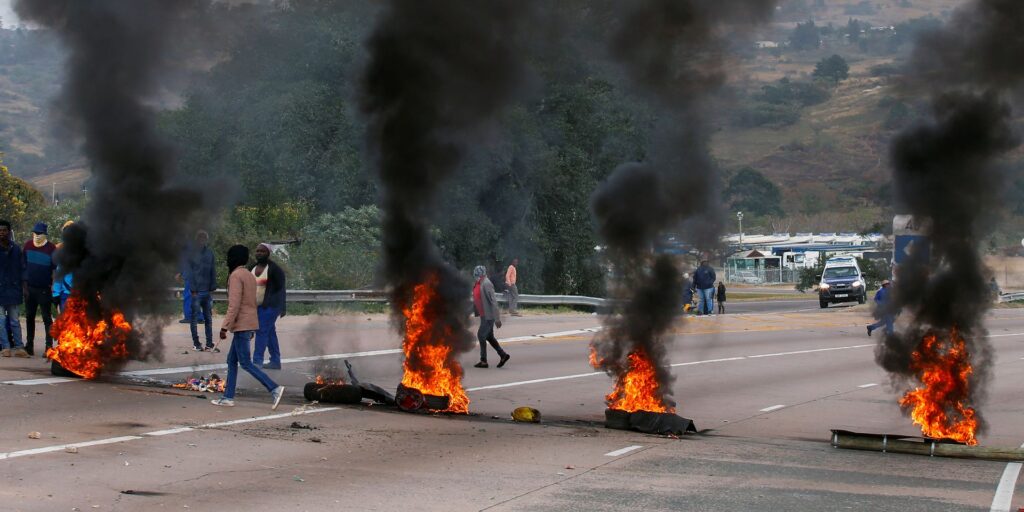 Protesters in a city in South Africa’s north east blocked roads including a key route linking the country to Mozambique with trucks Wednesday as they demonstrated against pump prices rising to a new record.

The road between Mbombela, 350 kilometers (217 miles) east of Johannesburg, and White River has been obstructed by parked trucks, as is the N4 highway connecting the city to the border with Mozambique and the port of Maputo, Callum MacPherson, regional operations manager at Hi-Tech Security Nelspruit, said by phone. A group of minibus-taxi operators started blocking trucks and taking drivers’ keys at around 1 a.m. local time, according to freight drivers Bloomberg spoke to.

The blockades continued into the afternoon, said Solange Soares Nicholson, spokeswoman at Trans African Concessions (Pty) Ltd., which operates the N4 highway. Further snarl-ups were being caused by a truck spilling coal across the road outside the town of Emalahleni, west of Mbombela, she said.

“Nothing is moving at all,” along the route that’s vital for South Africa’s exports of chrome, a key ingredient in stainless steel, said Barbara Mommen, owner at Coalescence, a cross border trade consultancy. There will be a “huge impact on trade efficiency and enormous cost to exporters and operators. And consequent losses to the regional economy.”

An average 1,500 trucks mainly exporting chrome, but also coal, travel to Maputo’s port along the highway daily, Mommen said in a virtual interview. Delays cost operators 5,000 rand ($298) a truck per hour, she said. That equates to as much as $14 million a day.

“We’ve got a huge crisis,” said Mommen. “Those sorts of losses are not easy to recoup.”

Gasoline and diesel prices in South Africa surged to a fresh all-time high Wednesday on rising oil costs and as the government trimmed a temporary reduction in a fuel levy. Fuel has a weighting of almost 5% in South Africa’s consumer price basket and the increases will place further pressure on household finances and inflation.

Police in Mbombela, the Mpumalanga provincial capital, were trying to remove the trucks, Selvy Mohlala, provincial spokesman for the South African Police Service, said by phone.

At least 15 protesters were arrested, Rise FM, based in the city, reported, citing police.

The protests follow a strike by bus drivers in Maputo, Mozambique’s capital, on Monday after diesel prices were increased by 11% and gasoline by 4.4%. The action ended after the government pledged to subsidize some fares.