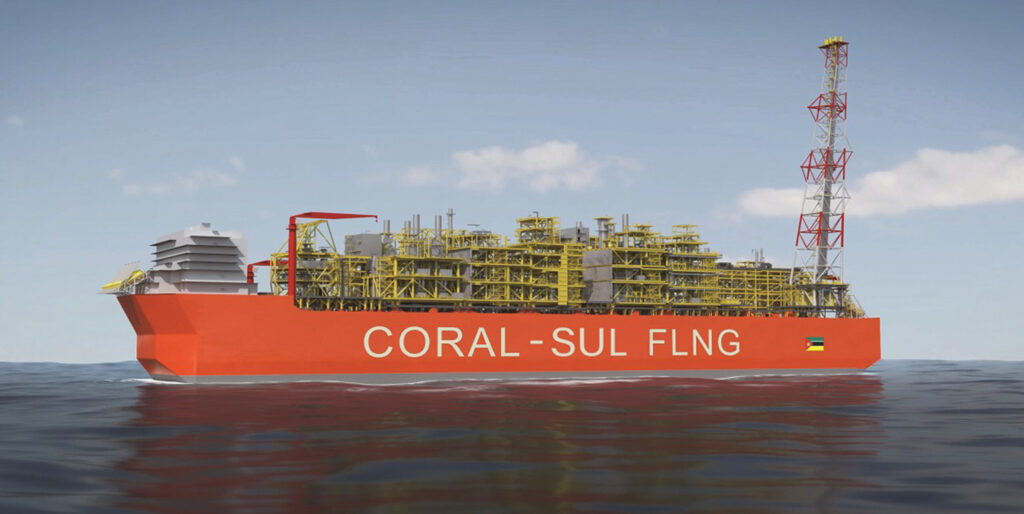 Italian energy major Eni has announced first gas to the Coral-Sul Floating Liquefied Natural Gas (FLNG) facility from the Coral South Field located in Area 4 of the Rovuma Basin offshore Mozambique. The development sparks a new era of hydrocarbon growth in the southern African country, with Mozambique now on track to produce first liquefied natural gas (LNG) by the end of this year.

Eni, alongside its partners ExxonMobil, the China National Petroleum Corporation, GALP, KOGAS and Empresa Nacional de Hidrocarbonetos, are targeting the production of LNG for exportation to Europe and Asian markets. The development will spark a wave of gas monetization in the hydrocarbon-rich country, with gas driving socioeconomic development both locally and across the wider region while addressing global demand for LNG in the wake of the Russia-Ukraine conflict.

The Chamber is confident that the Coral-Sul FLNG’s 3.4 million tons per annum of gas output will be a game changer in improving energy reliability in Africa and across the globe

With over 600 million people across the African continent living in energy poverty and 900 million people without access to clean cooking solutions, the Coral South Field development marks a new chapter that will see the exploitation of Mozambique’s 100 trillion cubic feet (tcf) of gas reserves to address continental and global energy needs. The African Energy Chamber (AEC), as the voice of the African energy sector, strongly supports the milestone achieved by Eni and its partners in bringing the country’s LNG market to life. The Chamber is confident that the Coral-Sul FLNG’s 3.4 million tons per annum of gas output will be a game changer in improving energy reliability in Africa and across the globe.

With Africa seeking to diversify its energy mix, the exploitation of the continent’s 620 tcf of gas reserves, through projects such as Coral-Sul FLNG, not only provides an opportunity to expand power generation but to avert climate change. With Eni and partners leveraging zero flaring and dry low nitrogen oxide technology to reduce greenhouse gas, the Coral-Sul FLNG project provides a blueprint for both Mozambique and other African countries looking at adopting global sustainable gas production specifications, attract funding and accelerate project deployment. In this regard, the Coral-Sul FLNG milestone will unlock investments for Mozambique’s LNG gas boom and help accelerate the development of planned projects such as TotalEnergies’ Mozambique LNG, and Eni and ExxonMobil’s Rovuma LNG developments.

“The development of FLNG platforms is key to unlocking Africa’s full energy potential and in making energy poverty history across the continent through the exploitation of domestic gas resources. The Chamber would like to congratulate both Mozambique and Eni for the Coral-Sul FLNG milestone. This is what Africa needs: the rapid development of energy projects,” states NJ Ayuk, the Executive Chairman of the AEC, adding that, “The Chamber is committed to working with H.E. Carlos Zacarias, Mozambique’s Minister of Mineral Resources and Energy, and industry stakeholders to attract investments and put in place business models and fiscal terms which are required to bring other planned LNG projects online.”

The AEC’s annual conference, exhibition and networking event, African Energy Week (AEW), which takes place from 18 – 21 October 2022, in Cape Town, will host high-level discussions around Mozambique’s, as well as other gas-rich countries in Africa, gas miracle. During AEW 2022, a delegation from Mozambique led by the Ministry of Mineral Resources and Energy will provide an update of Mozambique’s gas market and present investment opportunities across the country’s LNG market. AEW 2022 will host panel discussions, investor summits and exclusive networking forums to discuss the future of Mozambique’s gas industry.