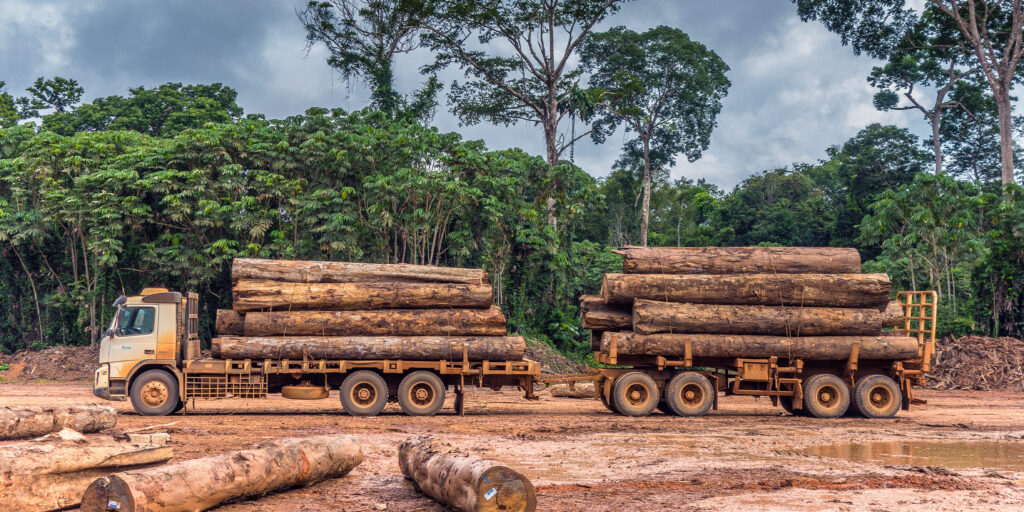 Located in Zambia’s North-Western Province, the greater Kafue National Park and West Lunga ecosystem complex was once home to an abundance of ancient rosewood trees and a host of other endemic and endangered species.

Now, aerial views reveal slabs of fallen trees peppering black holes in the green forest canopy. Fenced clearings open up to piles of orange rosewood, stacked high in the grounds of a sawmill. Forest clearing is slowly destroying an ancient ecosystem that once teemed with biodiversity, from elephants to lions. Today, little more than a few antelope are left roaming the area.

On the edge of the park, in the settlement of Ntambu, is the residence of His Royal Highness Chief Ntambu, leader of the local Lunda people.

“The value of the forest is immense,” the chief explains. “Yet there are several threats of grave concern to the ecosystem, which must be tackled with community-led solutions.”

Around half of the population in the surrounding area live in extreme poverty. With few jobs, communities depend on the forest for food, fuel and income. This combination of demands is driving deforestation, largely through forest clearing for agriculture or poaching for food and income. The West Lunga landscape is now the third-most deforested in the country.

A new project, supported in part by the United Nations Environment Programme (UNEP), is aiming to help change that. With funding from the Global Environment Facility, teams are working to expand protected areas and help local communities manage forests more sustainably.

“The harsh realities of poverty for the communities living in this area create a vicious circle where immediate needs for food and fuel aggravate the very conditions contributing to the poverty in the first place,” said Johan Robinson, a Portfolio Manager for UNEP. “This project will empower local communities to benefit from the natural resources in their care while conserving biodiversity: a win-win for everyone.”

Zambia is far from the only country struggling with deforestation and land degradation. Humanity has altered 75 per cent of the Earth’s surface, and a UNEP report from 2020 found that we have lost an area of forest the size of India (420 million hectares) to land conversion in the last 30 years alone.

On a bright morning in Ntambu, wildlife supervisor John Muzenzi and his team of scouts wade through long stands of savanna grass, towards a water point. They set out early to track wildlife and lay down large slabs of salt lick and animal feed while searching for signs of poaching and other illegal activity.

This is Ntambu Community Game Reserve, a community-owned and run project supported by the West Lunga Conservation Project (WLCP), that aims to provide communities around the park with affordable, legal meat and jobs, as well as the potential for future income opportunities from tourism.

There are now over 170 antelope in the 1,000-hectare fenced reserve. At school events and football matches, Muzenzi and his team educate communities to halt illegal activities because, says Muzenzi, conservation: “should begin from the community, because the community is where the poachers are coming from.”

In the last few years, through a partnership with the Department of National Parks and Wildlife (DNPW), wildlife ranger and scout patrols have ramped up from 40 a year to over 40 a month, removing more than 200 firearms from poachers and clearing more than 17,000 snares from the wider West Lunga landscape.

The patrols are part of a larger effort to encourage local residents to forsake poaching and logging, said chief Ntambu.

“Social problems don’t disappear in the blink of an eye. Without properly engaging the community, taking them away from [illegal] activities won’t help us at all. We have secured opportunities in fish farming, honey making, nursing and gardening, so that our people contribute positively to the welfare of this community.”

As part of the UNEP-supported project, existing initiatives like Ntambu Community Game Reserve will be expanded to support the community and protect the park and its surrounding community-owned forests.

Managed by The Nature Conservancy and jointly implemented with the Forestry Department, in close collaboration with UNEP and partners, including the Trident Foundation, WCLP and the World Wide Fund for Nature, the project aims to support communities to protect, sustainably manage and equitably benefit from the natural resources in their care over the long term.

The long-term success of this project is grounded in two key factors: firstly, a strong foundation of policy work that empowers communities with provisions to better manage forest resources. This includes revisions to the Forest Act and the Community Forest Management Regulations Act, which facilitated the creation of community groups that manage communal lands and some protected forests.

On a global scale, the economic opportunities presented by restoring degraded land are enormous, amounting to between US$4.3 trillion and US $20.2 trillion annually through the provision of ecosystem services from restored land alone.

UNEP’s report Becoming #GenerationRestoration noted that with half of the world’s gross domestic product dependent on nature, every dollar spent on restoration creates up to US$30 in economic benefits.

While a growing opportunity exists around generating revenue from international forest carbon markets, the forest also has the potential to drive other more traditional sustainable income opportunities, like honey production.

The honey industry in Zambia is growing exponentially, with the North-Western Province holding the potential to host an estimated 500,000 hives – enough to produce 25,000 tons of honey per annum. Currently, less than 1 per cent of this capacity is met.

The project will build on an existing partnership with private company Nature’s Nectar, working with local beekeepers to replace traditional hives, which strip tree bark, with more sustainable Kenyan top bar beehives made from sustainable pine. More than 5,000 geo-tagged hives, supplied by the Trident Foundation, allow beekeepers to track honey production and boost individual incomes by some US$280 a year.

“At first, we never saw the importance of bees,” said Florida Belu, a beekeeper working with Nature’s Nectar on the park’s borders. “We used to think that bees were useless, and beekeeping was only for men.”

“But nowadays, women are also involved. This means the money will be used to pay school fees for our children.” Belu is now supplementing her income from cassava, which earns her just US$14 per harvest, with honey, which brings in almost four times that amount.

Back in the green surrounds of his residence, Chief Ntambu beams as he explains the community-led initiatives that are starting to take root on his people’s land. He has one wish, he says: “We hope that by the time we go to join our ancestors, we shall leave Ntambu better than we found it.”