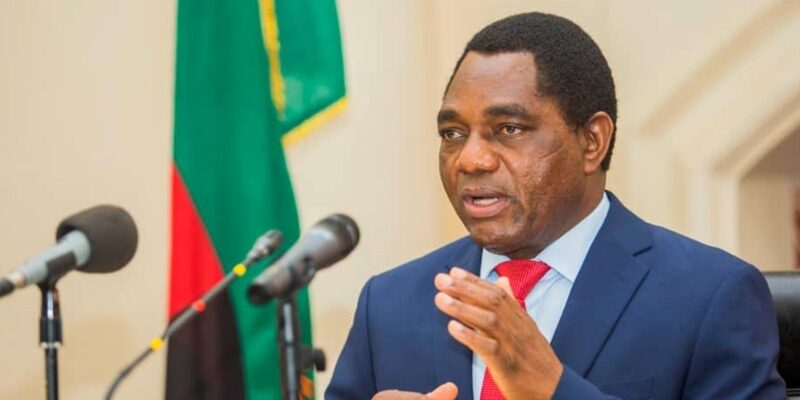 AS the world increasingly looks toward an energy transition, Zambia can take advantage of the appetite for electric vehicles to be in the queue of prospects as a key supplier of the green revolution.
The process of shifting from a reliance on fossil fuels to renewable sources of energy is a mammoth undertaking, but the fact that technology for harnessing green energy is ever improving is, perhaps, a moment African countries such as Zambia were waiting to seriously recoup from its ‘superficial’ mineral fortune.
So, too, are the investment opportunities that mineral-rich countries like Zambia are in line to attract and make huge fortunes now that the world is turning to electric vehicles.
On November 24, 2021, President Hakainde Hichilema was among leaders that attended the DRC-Africa Business Forum, which was convened by the Democratic Republic of Congo (Congo DR).
Top of the agenda included how the continent can take advantage of the demand for electric vehicles to supply raw materials such as copper and cobalt in large volumes.
The prime objective of the event was envisioned at how to help change the fortunes of the Congo DR and those of other African countries by adding more value to their endowments in battery minerals, including cobalt and copper, to profit from the global transition towards green energy, electrification of transport systems and rapid decarbonisation.
Just like Zambia, the DRC supplies huge tonnes of the world’s cobalt used in the production of batteries, an essential component to power electric vehicles (EVs) and to store energy in solar and wind energy systems.
Zambia is Africa’s second largest producer of copper on the continent after DRC.
However, the two countries can also cash in on growing demand for electric vehicles by stepping up its production and refining of cobalt, a by-product of copper.
But, unlike DRC, Zambia has the capacity to refine cobalt on a large scale for use in battery manufacturing.
Mr Hichilema noted that global revenue estimates for electric vehicles battery chain extraction stands at US$11 billion, grows by 35 per cent to US387 billion at battery production, and further by 600 per cent to US$7 trillion for electric vehicle production.
The President said Africa is losing out on this mega revenue creating industry because it ends at extraction and no value is added.
Mr Hichilema said the forum has given Africa an opportunity to examine this loss, restrategise and ensure it repositions itself in this value chain.
He said of the top 15 global producers of battery minerals, eight are African countries – Zambia, DRC, Madagascar, Morocco, Zimbabwe, Gabon and Ghana.
However, President Hichilema said value addition such as top cell production, assembly and production of electric vehicles is in China, Korea, Japan, USA, France and Germany.
“The global transition towards green energy and rapid decarbonisation holds significant opportunities for Africa at large.
“We must seize this opportunity as a continent and not allow the continued fragmentation of our regional mineral value chains”, Mr Hichilema said.
It is important to state that in order to realise their goals of becoming carbon neutral within the next three decades, countries like China, the USA, and the UK all need to move quickly to secure a reliable supply of critical metals.
Zambia is endowed with three major metals which are cobalt, nickel, and copper.
Now, with demand for copper in one key growth area – Electric Vehicles (EVs) – accelerating faster than previously expected, the stakes in the green tech race are even higher.
EVs require an average of twice as much copper as their combustion engine counterparts.
According to estimates by the mining sector for Zambia, end–use demand from electric vehicles is forecasted to rise from current estimates of around 600,000 tonnes to roughly 2.9 million tonnes within the next decade.
This means that today’s EV-driven demand for copper represents just over 20 per cent of what will be needed annually by around 2030.
The battery packs that power these light duty EVs typically contain three to four times the amount of copper required by their gasoline and diesel-powered equivalents.
Experts say this translates to 80-85kg of copper in the batteries and motors of EVs, compared to the 20-25kg needed for Internal Combustion Engined (ICE) cars.
This is because naturally, bigger battery packs required by heavier-duty vehicles – from fully electric trucks to Plug In Hybrid Electric (PHEV) models – require substantially more copper.
Highly-conductive copper is also ‘king’ when it comes to making the components for EV charging infrastructure.
Experts say the bullish copper forecasts have recently been met with a spike in manufacturing capacity for a particular type of copper product called electrodeposited (ED) Copper foil which makes up a bit less than half of the average EV battery.
The process of manufacturing ED foil relies mostly on so-called high-grade scrap, taking some pressure off of copper miners and refineries.
Nevertheless, surging demand for the red metal is creating a substantial supply-demand gap which will be an enormous challenge to plug.
Sokwani Chilembo, Chief Executive Officer of the Zambia Chamber of Mines (ZCM) believes that the shift towards green energy generation and EVs is possibly the most immense demand opportunity that the copper mining sector has ever seen.
But mining expert Christopher Chiyesu of Kitwe argues that Zambia is still far from reaching its full potential, which is primarily the result of an uncompetitive and ever-changing mining tax regime.
“But, all is not lost, if we act with speed.
Other jurisdictions, particularly those in South America that have seen the greatest growth in recent years, may become less attractive investment destinations, as their national politics shifts to the left.
So, there is potentially a window of opportunity opening for Zambia”, he says.