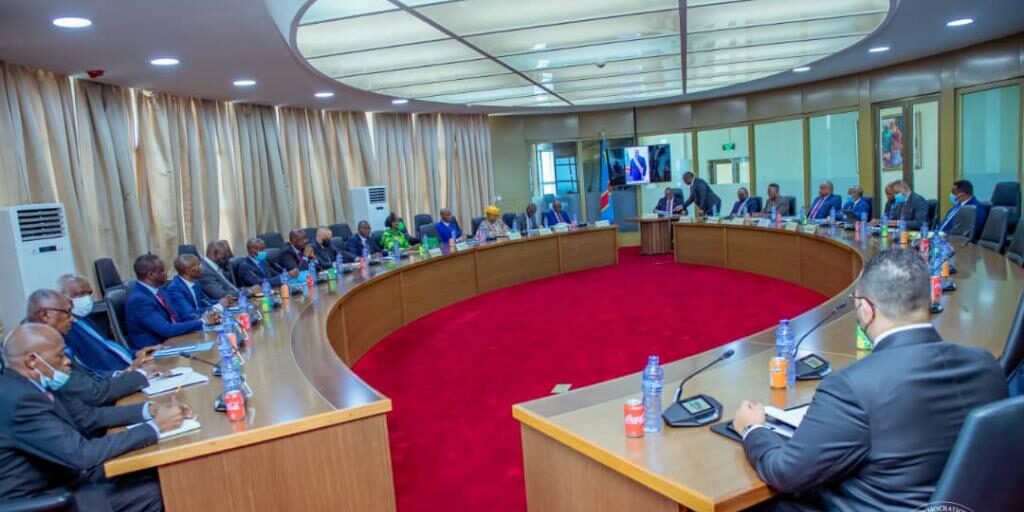 The Prime Minister, Jean-Michel Sama Lukonde, gathered around him, on Wednesday April 6 at the Hôtel du Gouvernement, the oil operators working in the DRC, the Minister of Hydrocarbons, the Minister of Communication and Media and all the other Ministers who are members of the Government’s ECOFIN commission, to examine the issue of fuel supply with a fine-toothed comb at this time when international trade is disrupted following the Russo-Ukrainian conflict.

According to the Minister of Communication and Media, the Government of the Republic has taken the fuel issue head on. Reason for which, it was necessary to listen to the operators of the sector.

“There is indeed a crisis in Russia and Ukraine. This crisis is causing global overheating in the prices of basic necessities, especially fuel… At the end of this meeting, you have seen that the government is working, as always elsewhere, closely with the players in the sector. There are obviously slates that must be filled within the framework of the mechanism put in place because the Congolese must know that the fuel you buy at the pump, 40% is paid by the Government and that, as a result, there are mechanisms for paying losses and shortfalls that take time. This is what makes it difficult today for oil companies to supplies. Arrangements have been made for this to happen”,said Patrick Muyaya Katembwe.

For his part, Charles Nikobasa, Managing Director of Engen who spoke on behalf of all the oil operators present at this meeting, not only was submitted to the Government the difficulties of the operators, but also and above all the solutions were proposed to bring the situation under control.

”During this meeting, we exposed to His Excellency, Mr. Prime Minister, the difficulties of the sector which are due to the fact that the parameters of the price structure are not reviewed in time and this creates losses and shortfalls . So the solutions that have been proposed are that we can combine a study with the price review to eliminate the shortfalls. That we can certify and pay the losses that have already occurred until the end of 2021 and the first quarter of 2022. But in addition, we have also offered long-term solutions. Solutions such as strengthening good governance, eliminating fraud, increasing volume. Because if the volume increases, the prices at the pump will be better controlled by the State. We also suggested that we do a deep reflection on the optimization of the logistics of product imports to the DRC. That we can make pipelines to optimize and control the price at the pump”, he suggested.

The concern of the Sama Lukonde Government remains that the country’s fuel supply does not suffer from any disruption so as not to expose the Congolese to the harmful effects of price speculation.