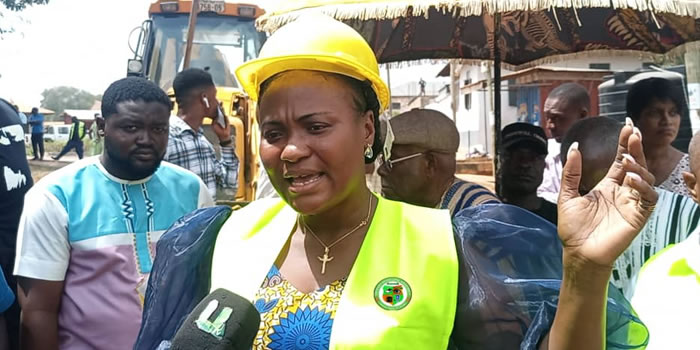 President Nana Akufo-Addo’s commitment to developing the Abokobi town roads was reaffirmed by Elizabeth Kaakie Mann, the Municipal Chief Executive (MCE) for Ga East Municipal Assembly (GEMA). Mann made the announcement at a ground-breaking ceremony to kick off the construction of Abokobi town roads.

A total of 2.3-kilometer roads and 220 meters of concrete drainage are part of the two-phased project. Phase one entails the construction of a 1-kilometer stretch of the Abokobi-Sesemi road with drains in three months. Adjei Okwejen Road is expected to be rehabilitated for 1.3 kilometers from Abokobi Station to the Saka Addo Road and back.

Sikasem Limited is currently implementing the project, which is expected to cost 1.2 million Ghana Cedis and is funded by the Assembly’s Internally Generated Fund (IGF).

Miss Elizabeth Kaakie Mann, stated that the President was dedicated to delivering on the Year of Roads pledge and urged citizens to be optimistic about the rehabilitation of roads in their localities. She claimed that she wanted to reassure all people in the municipality that her group was prepared to ensure that significant development touched every part of the region in years to come.

The Municipal Chief Executive guaranteed that funding had been allocated for the Abokobi town roads implementation and that she would keep an eye on the project to ensure that quality was provided on time. She also urged local residents to support and cooperate with the contractor in order for the project to be completed successfully. Hon. Kaakie Mann tasked the contractor with completing the job on schedule and to the satisfaction of the residents.

Samuel Nii Adjetey Mohenu, the Chief of Abokobi, expressed his satisfaction at the Assembly’s decision to refurbish Abokobi town roads. He reaffirmed his support and dedication to ensuring the project’s success in providing relief to residents and road users.

Ceaser Sackey, the Deputy Municipal Urban Roads Engineer (MURE), said his office will check the project’s progress on a regular basis to verify that the work is being done correctly and according to the contract specifications.

Maxwell Amponsah, the project’s contractor, told the stakeholders and the region’s residents that he was committed to completing the project on time and on budget.